VP Biden: Transgender Rights Are The Civil Rights Issue Of Our Times 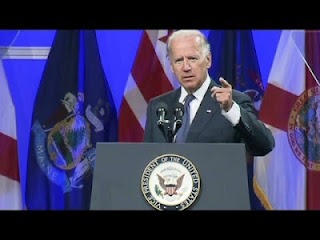 I've always liked Vice President Joe Biden for a number of reasons, but I have even more reason to love him according to a HuffPo report.

He was visiting an Obama for America field office in Sarasota, FL yesterday when he struck up a conversation with a woman who was there at the office that according to the pool report has 'beautiful eyes'.

Their conversation was inaudible to the pool reporters, but Biden is reported to have said it 'is the civil rights issue of our times'.  The woman in question was identified Sarasota resident Linda Carragher Bourne.

She said her daughter was Miss Trans New England and that she had asked Biden if he would help them.

"A lot of my friends are being killed, and they don't have the civil rights yet. These guys are gonna make it happen," Bourne told the reporter.

The commentary underscores the fact that when it comes to trans issues, the Obama Administration has been the best ever when it comes to trans human rights issues.  It's why many trans people supported him in 2008, and I'm proud as a trans African-American to see that a president who shares my ethnic background has been an ally to our community.

And as human rights warrior Julian Bond once said,  “The humanity of all Americans is diminished when any group is denied rights granted to others.”

Trans rights are a human rights issue, and anyone who thinks that we shouldn't have the same rights they do is making their own human rights less secure.

I discovered your web site via Google while looking for a related subject, lucky for me your web site came up, its a great website. I have bookmarked it in my Google bookmarks. You really are a phenomenal person with a brilliant mind!