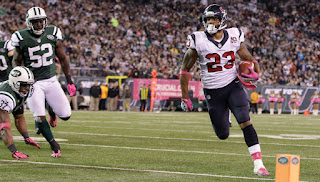 Last week in expressing how deep his support for Mittens was, NY Jets owner Woody Johnson said he would rather his football team lose than Mitt Romney lost this presidential election..

Well Woody, the Houston Texans helped you out on that score on national television.  On November 6 the American electorate will determine the other part of your statement.

But back to discussing my fave NFL squad.

In only their fifth Monday Night football appearance ever and their first since that heartbreaking 34-28 overtime loss in 2010 to the Baltimore Ravens, the Texans kept their 2012 season perfect with a 23-17 win at Met Life Stadium over the struggling but determined New York Jets.

It was also the first win ever in Texans franchise history after five tries against the Jets. 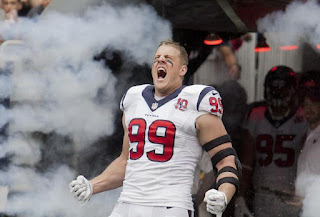 Arian Foster has 152 yards rushing on 29 carries and a touchdown, but the Bulls on Parade and especially JJ Watt made life miserable for Mark Sanchez.

Watt had two sacks to take the NFL lead in that category, six tackles overall and three tipped passes.  One of those tipped passes led to a critical red zone interception that led to a 17-7 Texan halftime lead.

The Jets gave them a beter game than people expected including a 100 yard Joe McKnight kickoff return for a TD after the Texans had taken a 20-7 third quarter lead, but they didn't have enough offensive firepower to beat a Texans team that was not on their 'A' game tonight.

The Texans next game is their debut on NBC Sunday Night Football at Reliant Stadium against the Green Bay Packers.
Posted by Monica Roberts at 11:30 PM