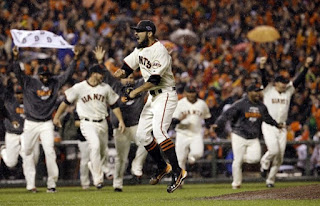 I can understand St. Louis Cardinal fans being upset and angry with their team after they coughed up a 3-1 lead in the 2012 NLCS over the San Francisco Giants, then were spanked 9-0 by the Giants in Game 7.

The Giants became only the fourth team in major league baseball history to come back from that kind of deficit, win the National League championship and advance to the World Series.

But dayum people,  you didn't have to get this nekulturny and flat out homophobic, sexist and racist with the tweets you posted in the wake of that stunning defeat.   Thanks to @BestFansStLouis, and Brock Keeling at SFist the ugly scab of homophobia, racism and sexism got exposed and we have a record of it.

Jojo @HojoJarden
Giants stadium is loud but the clapping noise u hear in the stands is actually from all those fags in San Francisco jerking each other off.

Aaron York @ayork14
And to celebrate their win the San Fransisco players and coaching staff will be heading to the bath houses to start another aids epidemic.

Fox showed things San Francisco was famous for, but they forgot the most important thing: AIDS

Blake Martindale @BleezyBlee
They are getting loud at homo stadium in san fran....they have the cards messed up. Queers going wild

If you're at the Ritenour game instead of watching the Cardinals game, you're probably a nigger

But sadly it's not an isolated incident when it comes to opposing fans letting out their inner homophobia out either in the wake of their teams either playing or losing to San Francisco based clubs.   Conservafool Texas Ranger fans billed their 2010 World Series clash with the Giants they lost as a battle between the 'Steers vs Queers'..

Going to be fun to watch the World Series play out between Detroit and San Francisco knowing a bunch of phobic Cardinal fans are majorly pissed off they aren't in it.