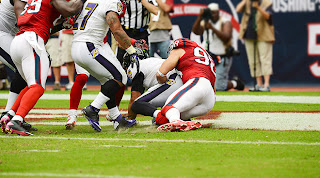 When the 2012 schedule was first released, this was a game Texans fans were looking forward to ever since that gut wrenching divisional round playoff loss in Baltimore back in January.

After my fave NFL ballers came down from the unbeaten ranks with an embarrassing 42-24 thud on national television at home to Green Bay, the Texans players were looking forward to it as well.

The Texans fans also got the opportunity to welcome Jacoby Jones back to Reliant Stadium and let him know we still haven't forgotten that boneheaded play that set in motion that playoff loss.  The injury script was also flipped this time as the Ravens defense was missing Ray Lewis and Lardarius Webb, and had other key players such as Ed Reed and Haloti Ngata nursing nagging injuries.  But there was good news on the injury front for the Ravens in that Terrell Suggs did play for the first time this season 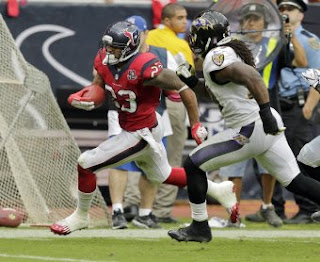 The Ravens kept an interesting tendency going of being a formidable team at home but average on the road.  They've also had trouble over the last two weeks stopping the run.

The Texans had no empathy for the plight of the NFL ballers from Baltimore as they put on the battle red uniforms, woke up from sleepwalking through last week's game and made the Ravens see red.

The Bulls on Parade defense swatted passes, sacked Joe Flacco four times including one for a safety, and picked him off twice.

One of those interceptions was the Jonathan Joseph pick six that broke the game wide open and was part of a 20 point second quarter explosion that led to a satisfying for Texans fans 43-13 blowout win.

It was not only the first victory ever against the Ravens, it was the most points a Texans team has ever scored against an opponent.   It also gives the Texans the best record in the AFC at 6-1 going into their well deserved bye week and earned me some crabcakes from one of my friends in Baltimore.

The Texans will get to watch everyone else play in Week 8, then get ready for their Week 9 home game at Reliant Stadium against the Buffalo Bills.

Hope this team I saw today hangs around until February 4, 2013