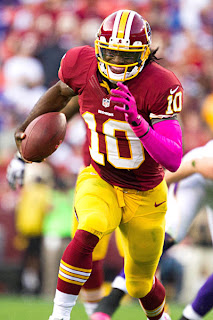 Washington Redskins football is always a popular ticket inside I-495 and the Washington DC area, but every four years the last Redskins home game before the election takes on a heightened significance with the inside the Beltway political pundit class because of the Redskins Game Election Predictor.

So what's the story behind the Redskins Game Election Predictor?

The only time the Redskins Game Election Predictor has been inaccurate was in 2004. The Green Bay Packers marched into FedEx Field on Halloween night and beat the Redskins 28-14 but GW Bush stole the election won anyway

The incumbent party in the White House this time is the Democrats and the Redskins will be playing the Carolina Panthers at FedEx Field on Sunday.   You can bet there will be some extra loud cheering for RG3 and company coming from 1600 Pennsylvania Ave, Obama campaign headquarters in Chicago and from every Obama supporter in the country for a Redskins victory.

Time for me to learn the Redskins fight song, too
Posted by Monica Roberts at 12:00 AM