Big Tex Goes Up In Flames 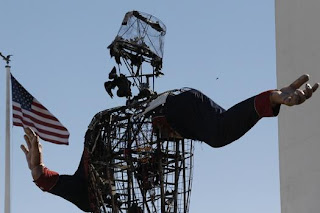 The 2012 run of the State Fair of Texas closes down in Dallas later today, but as it does so it will be missing a beloved iconic figure that stood tall over it for 60 years.

Big Tex, the 60 foot tall cowboy that stood over the fair since 1952 caught fire Friday.   It's suspected that an electrical fire that started in the wired jaw that allowed the statue to say 'Howdy Y'all" is what caused its fiery demise. 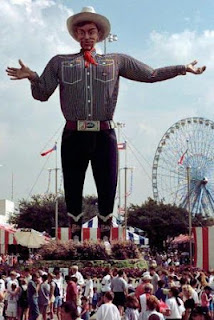 Dallas Mayor Mike Rawlings is already on record as stating Big Tex would be rebuilt and in place to greet visitors to Fair Park when the 2013 edition of the State Fair opens next year.
Posted by Monica Roberts at 12:00 PM