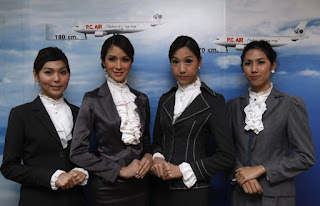 The ten month old Thai airline PC Air that garnered international attention and publicity when it hired trans flight attendants for its crews, has hit some business turbulence since its maiden December 2011 flight.

The fledgling carrier's lone Airbus 310-222 was stuck at Seoul's Incheon airport because the company has not paid its overdue airport charges and fuel fees and South Korean authorities wouldn't allow it to take off last Tuesday.  .

That left a total of 400 people stranded- 200 at Incheon and another 200 people waiting for the aircraft arrival in Bangkok to take them to South Korea.

The stranded charter flight passengers were put on three Thai Airways flights and another flight arranged by PC Air management as their CEO Peter Chan jetted to South Korea to resolve the issues.

PC Air cited unspecified problems and a dispute with their South Korean agent Skyjet that caused the airline to fall behind on the fuel and airport fee payments and put the airline in jeopardy of losing its operating license which is valid until 2015.

PC Air continues to operate its scheduled flights between its Bangkok hub to Incheon and Hong Kong and reportedly plans to add two used Boeing 767s capable of carrying more than 200 passengers to its fleet starting in December. 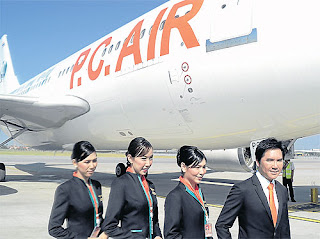 While the Thai Transport Ministry is unlikely to strip PC Air of its operating license despite loud calls to do so, the charter license under Thai aviation law is on a monthly renewal basis and will expire on October 31.  The Thai Transportation Ministry will not renew th charter license until PC Air proves to their satisfaction that what occurred at Incheon will not happen again.

The controversial Transportation Ministry decision was based on its desire to see PC Air work out their business problems and compensate the passengers inconvenienced by the grounding of their aircraft.

Lets hope for the sake of our trans sisters working for PC Air that their former flight attendant CEO gets their airline business end straightened out.  I and transpeople around the world would like them to continue flying the friendly skies from the Land of Smiles and have a solvent and prosperous PC Air be around to hire more of their sisters.