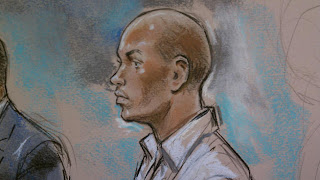 I been keeping up with the ongoing case involving former Washington Metro PD officer Kenneth Furr.

You'll recall TransGriot readers that back in August 2011 an off-duty and inebriated Furr got pissed because a trans woman ignored his disrespectful proposition to her at a NW Washington CVS store.

He chased them down, jumped on the hood of their vehicle and used his service revolver to fire shots at them.  Furr was iindicted on March 7 for that incident which left two trans women and their male companion with thankfully non-life threatening injuries.

Furr's trial started on Monday.   He plead not guilty and jury selection is happening now.  Will keep you posted on what happens in it and if the transwomen and the male friend involved get justice.
Posted by Monica Roberts at 12:00 PM