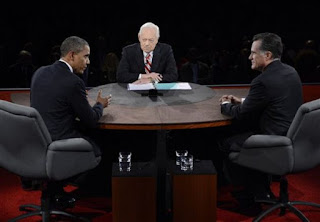 While the Chicago Bears were dominating the Detroit Lions during their 13-7 victory at Soldier Field last night, in the other big Chicago vs Detroit matchup on the political stage President Obama also won big in his final debate with challenger Mitt Romney.

Hey, that's not just my chococentric assessment of this debate.   Three snap post debate polls show that the POTUS won.  The loud conservafool whining  already commencing on the Net about the moderator, speaking time and other issues tells me all I need to know about who won in addition to what I watched transpire over those 90 minutes.

The 'Big Chief' as Tom Joyner calls him showed up at this debate, but he was confronted with another version of Moderate Mitt.   This time Mitt was in 'me, too' mode repudiating stances he took during the Republican primary and over the six years he's run for POTUS and President Obama called him on it.

And note to Mitt Romney, check a map the next time you try to go into a foreign policy debate because it's obvious you are woefully lacking in that aspect of the POTUS job and having the GW Bush foreign policy peeps sniffing around you doesn't help..     .

There was also that devastating counter to Mittens talking point that the US Navy has less ships than it did in 1916 and the President swiftly and snarkily whacking him with the point that the US military has fewer horses and bayonets.

“You mentioned the Navy, for example, and that we have fewer ships than we did in 1916. Well, Governor, we also have fewer horses and bayonets … because the nature of our military's changed," the president taunted. "We have these things called aircraft carriers where planes land on them. We have these ships that go underwater, nuclear submarines.”


The Commander in Chief was in command of the facts, knew his stuff foreign policy wise while Mitt was sweating, saying the POTUS has done a great job, and regurgitating his loud and wrong foreign policy campaign talking points President Obama ripped to shreds.

That's why President Obama whupped that Mitt again when this evening at Lynn University was over.   Now with 14 days left until Election Day we'll see if the voting public sees it that way as well.