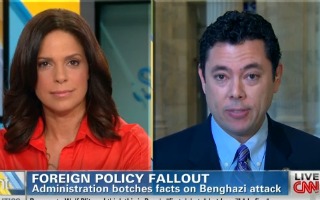 Sooner or later, the conservafools are going to get the message that CNN's Soledad O'Brien isn't some stenographer to power like the Fox Noise fembots are.

The person who definitely should have know better was Rep. Jason Chaffetz (R-UT).  She handed him his azz back in August.

Chaffetz, who is (big surprise) shilling for Romney and on Darrell Issa's (R-CA) committee trying to politicize this attack, was trying to pimp the faux outrage over the September 11 Benghazi, Libya consulate attack.

O'Brien confronted him with the inconvenient fact he voted along with his Republican buddies to cut $300 million out of the State Department's budget that pays for consulate and embassy security.

So long story short, the blood of the Ambassador and the other two Americans unfortunately killed during that attack are on Chaffetz and his party's hands.

So enjoy this beautiful footage of another conservafool being caught by a journalist doing their job. .