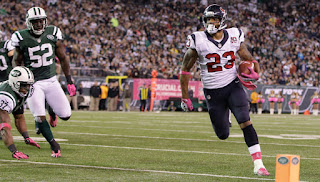 My Texans just continue to raise their level of excellence and go where no Houston based NFL team has gone before.

They are now 5-0 after winning their first Monday Night game since 2008 by defeating the New York Jets 23-17 and play their first ever NBC Sunday night game at Reliant against the Green Bay Packers.

But unfortunately we lost Brian Cushing for the season with a torn ACL in that Jets game.   Oh well, just like last year, next man up.

Drew Brees broke the Johnny Unitas record of 47 straight games with a least one TD pass in their first win of the season over the Chargers.

And speaking of wins, Mr Watts had a 10-4 record to finally beat me for the first time since the opening week of the 2012 season.  I went 9-5 with my picks and still have a five game lead on him

So let's get busy and get my picks up for Week 6 as I try to maintain or expand my lead on my fellow Texan.  Once again only have 14 games to pick because the Panthers, Bears, Jaguars and Saints are on their bye weeks.

Mike's picks are here for NFL Week 6, mine are in underlined bold print