Told Y'all The Republicans Were Neo-Confederates 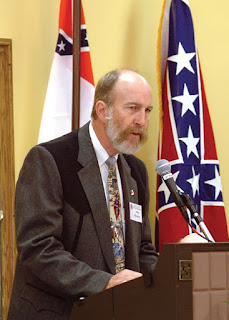 I had a proud conservative ask me recently why Black people hated conservatism and the Republican Party.  He didn't like my answer when I told him because his party had become the home of racist neo-Confederate idiots and people like him were turning a blind eye to it.

He tried to play the 'both parties do it' card that all conservatives resort to when they are confronted about their party's frequent bigotry eruptions, but I wasn't having that.   I pointed out that the Dixecrats have called the GOP home since the late 60's and long ugly racist history the Republican party has had since then.

The recent events have only added an exclamation point to what I told this proud conservative.

The firestorm hasn't died down yet from the comments that Arkansas Republifool state legislator Jon Hubbard made about slavery being 'a blessing in disguise for Blacks' and now another Arkansas Republican has put the pointed hood on, poured gasoline on the fire and co-signed what his KKKonservative KKKolleague has said.

Arkansas state rep Loy Mauch is the latest conservafool to go down the Lost Cause path by being outed by the Arkansas Times for being a pro-slavery pro-Confederacy defender in letters to the editor dating back over a decade.

“If slavery were so God-awful, why didn’t Jesus or Paul condemn it, why was it in the Constitution and why wasn’t there a war before 1861? The South has always stood by the Constitution and limited government. When one attacks the Confederate Battle Flag, he is certainly denouncing these principles of government as well as Christianity.”


Nowhere in the Holy Bible have I found a word of condemnation for the operation of slavery, Old or New Testament. If slavery was so bad, why didn’t Jesus, Paul or the prophets say something?
This country already lionizes Wehrmacht leaders. They go by the names of Lincoln, Grant, Sherman, Sheridan, Custer, etc. These Marxists not only destroyed the Constitution they were sworn to uphold, but apostatized the word of God. Either these depraved infidels or the Constitution and Scriptures are in error. I’m more persuaded by the word of God.

Yeah right, Loy Mauch.   You're still mad because the South (thank God) and your ancestors lost the War to Perpetuate Slavery their traitorous azzes started.   Get over it and the fact you can't own me or any other African-American much less treat us like crap because of it.

The Arkansas Republican Party can say all they want or put out the canned press release that they repudiate those remarks and they don't support these people, but the campaign money flowing into their campaigns and the support from US Rep Tim Griffin (R-AR) says otherwise.

And you're on the list for this week's Shut up Fool Award.