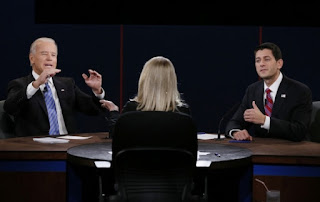 Okay squishy liberals, you can calm the f@$k down now.   Vice President Joe Biden handed Congressman Paul Ryan his behind in their debate at Centre College in Danville, KY last night.

You conservafools disagree with that assessment?   Wasn't it y'all who said just last week if you're complaining about the moderator your side lost the debate?

Y'all were attacking Martha Raddatz before she even sat down at the table to ask her first question.   When your laughable (pun intended) rationale for declaring Ryan the winner is because Biden was 'smiling too much' and 'rude', yeah right.

Vice President Biden was combative, took him to school on foreign policy and called Ryan out on his kill Medicare voucher plan.   The vice POTUS also repeatedly whacked him with the Romney 47% remark and reminded people that Ryan said something just as damaging in that 30% of the Americn people were 'takers'.

One of the best moments of the night was while Ryan was railing about the stimulus and how 'horrible' it was, Biden busted him with the revelation that he'd written two letters on behalf of his district asking for that stimulus money.

Can you say 'hypocrite' boys and girls?   Thought you could.    That took Ryan from the Land of Policy Make Believe real fast on that subject.


Ryan also admitted that their ticket wants to kill Roe v Wade, which may prove problematic over the next 26 days with women voters in light of the vice POTUS reminding people the next president gets to select some Supreme Court justices who may determine whter Roe v Wade statys the law of the land.

But most importantly, Biden's win slowed the momentum that was starting to build  for the GOP after Denver and now sets President Obama up nicely for Tuesday's town hall debate on the Hofstra University campus.