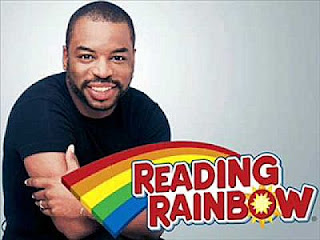 You TransGriot readers may remember LeVar Burton for his roles in Roots or Star Trek-The Next Generation, but his more important one was as the host for the award winning PBS show Reading Rainbow that ran on the network from June 6, 1983 until November 10, 2006 that encouraged children to read.

Reading Rainbow won a Peabody Award and 26 Emmy Awards, with 10 of those Emmy's being in the 'Outstanding Children's Programming' category.

But after hearing Mittbot attack PBS during Wednesday's presidential debate in Denver, Burton went off.

Burton said in a statement published at TMZ.com, "I am personally outraged that any serious contender for the White House would target as part of his campaign the children of America in this fashion."

"Educators across the country, as well as millions of children and adults know that the programming on PBS has been responsible for significant improvements in education, literacy, math, science and life skills for generations of our children."

He joined astrophysicist Neil deGrasse Tyson in calling out Romney and pointing out "PBS represents .00016% of our nation's budget, yet this free resource benefits kids across all economic circumstances."

Burton adds, "Defunding PBS directly punishes the less fortunate by removing this trusted and extraordinary educational resource available to all."

"On behalf of America's children, I can't stay silent. I encourage you to join me in fighting this short-sighted and frankly mean-spirited attack on our children."