Coming Out Is Different For A Trans Person

With today being  National Coming Out Day, you'll see ceremonies and events all over the country that will be primarily focused on the LGB end of the community rainbow.  For the trans end of the spectrum, coming out has a different twist to it.

When people come out as lesbian, bi or gay, they are still the son or daughter that their parents brought home from the hospital that day.   But when you come out as trans, it means that's akin to a death in the family.

The child they once knew will eventually be morphing into an outward gender presentation different from the one they brought home from the hospital.  Those parents will have to get used to that morphed body over time just as it took the trans person involved a certain amount of years to come to grips with the reality they are trans.

From the moment of that declaration that we are trans, we are going from zero to femininity or masculinity and begin the process of having to navigate all the societal baggage that particular desired gender role comes with while unlearning it from the birth gender role.

We trans people are the only part of the rainbow community that have to pay for the privilege of being ourselves. In addition to having to go through medical and surgical intervention, there's also wading through the paper trail we have piled up and changing those identity documents to reflect who we are now.

I don't want to underestimate how liberating it is for a trans person to come out to family, friends and allies.  It does wonders to lift the burden of carrying that tremendous secret off our psyches so we can begin to openly and honestly live our lives.

But a dose of reality as you make this life changing decision, especially if you're planning to do so under the euphoric environment of National Coming Out Day.

If you're a trans person of color, it's even tougher to come out and I understand that reticence to do so.  When we average two transwomen of color killed every month, 70% of the names we read during every  Transgender Day of Remembrance are Black and Latina, and we have the unwoman meme and disrespect hurled at us on a regular basis, it's enough to make you pause. 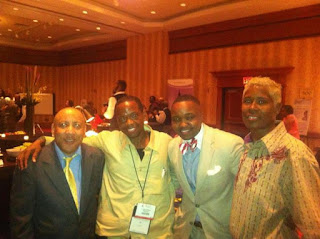 Unlike our white counterparts, we transpeople of color don't have the long established support groups or organizations that are fluent in our culture, backgrounds and needs.

We've only started getting the attention we deserved in the tail end of the last decade.  The Trans Persons of Color Coalition was founded in 2010, and we still have to fight tooth and nail just to get any kind of positive visibility or media attention for our role models and our issues.

Coming out for trans people of all ethnicities is tempered with the knowledge that we still have a long way to go to achieve trans human rights in this country   We still have a lot of education we have to do even with recalcitrant hardheads in our rainbow family and within trans circles about what being trans is.

But as I've discovered ever since I began my own transition in 1993, my life not only began when I did so and got comfortable in my own skin, my family expanded.  We have a proud history that is still unfolding every day.  I have out and proud trans brothers and sisters all over the world now.  I have trans elders who are eager to pass down their hard won knowledge to me so I can do the same for you.   I love the fascinating journey of discovery I've been on.

And I'm proud to be an African descended #girllikeus.    That outweighs whatever negatives connected with our coming out decision.

But to get to the point where I, Janet Mock, Isis King, Kylar Broadus and countless other trans brothers and transsisters are, the first step is coming out and living your life openly and honestly.   You need to not only do so for yourself when you feel comfortable and confident in yourself to do so, frankly the trans community needs you to do so as well.

The rest of being trans we can deal with one day at a time..