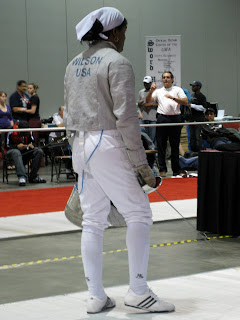 Today is the birthday of my Louisville homegirl and one time saber wielding housemate Dawn Wilson.

Lord Vader gets another year older and one year closer to having to compete with the Senior Mama's instead of the Baby Vets (snicker snicker).    But she can handle it since the last time I checked her USFA rankings she'd climbed as high as number 3.

And yeah, I miss her and our You're Under Arrest anime marathons we used to have fun watching and our nightly walks around our East End neighborhood . I also miss beating her behind at X-box bowling

But I don't miss her questionable tastes in music that....(cough, cough, wheeze)

Anyway, Happy birthday sis!   May you have many more. .

Now that I'n gotten Dawn's birthday business out of the way, time for me to focus on my usual Friday TransGriot 'bidness' in terms of selecting this week's Shut Up Fool Award.

While there were so many worthy candidates this week, I'm just going straight to the winner.

The white male privilege is strong with this one, Obi-Wan.   And fool, you are part of the most privileged laden group in America in terms of being a white male.  Don't even try to go there with that 'anti-white bias' conservabullshyt    The professors and campus administration  for starters not only come from your ethnic group, but the campus culture reflects it.

All of the other ethnic groups on the TU campus have those various organizations set up because they are negatively affected by and overwhelmed by the whiteness and white privilege you reek of.


Besides, you already have a White Student Union on campus.  They're called the Towson College Republicans.