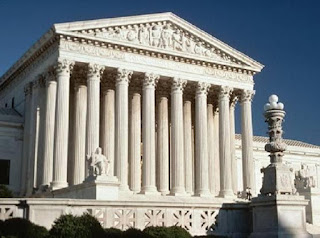 The Supreme Court is hearing arguments today on the contentious subject of affirmative action once again in a case that has Texas roots.

The SCOTUS will hear an hour of arguments in the case of Fisher v. University of Texas at Austin, which asks the court to rule on whether the university's consideration of race in admissions is constitutional.

Abigail Fisher, a 22 year old white woman who was rejected from UT Austin in 2008, has filed suit against the school, arguing its consideration of race doesn't meet standards previously set by the high court in the 2003 Grutter v Bollinger case.

The Supreme Court set a precedent in Grutter v. Bollinger  by rejecting the use of racial quotas but said that schools could consider race as part of a "holistic" review of a student's application.

In 2003, Justice Sandra Day O'Connor was the swing vote in favor of the "holistic" approach and when this Fisher case is argued Anthony Kennedy may possibly be that swing vote.

The University of Texas and other state schools as a result of the Hopwood case automatically takes the top 10% of high school graduating seniors, but Fisher wants college admissions to be "completely race neutral and race blind."

It has drawn amicus briefs for and against it with the opponents being sellout Rep. Allen West (R-FL), former Reagan Attorney General Ed Meese and the libertarian leaning Cato Institute.  The supporters range from Democratic Senate leaders Harry Reid (D-NV) and Chuck Schumer (D-NY), Teach for America and the American Psychological Association. Dozens of organizations in favor of the University of Texas system plan on holding a rally outside of the Supreme Court today.

If the court rules against the University of Texas, it could potentially change the way schools across the nation talk about race.
Posted by Monica Roberts at 8:00 AM