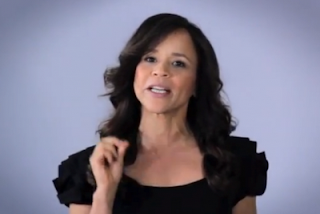 "Being Latino wouldn't win you the election, but saying jokingly that you wish you were may actually lose it for you."  Rosie Perez

Rosie Perez in a new video calls out Mitt Romney for the joke he made that was caught on the infamous 47% video.

He joked he would have an easier time in this election if he were Latino and Perez humorously reminds viewers of all the "Hispanic presidents" from "Jorge Washington to "Jorge Bush, uno y dos."

"Oh my goodness, what if you were just a little bit gay, Mitt? Think of all the advantages that would provide. No, wait for it. What if you had a vagina? If you were a gay Latina this election would be in the bag for you. Unfortunately, for you Mitt, you were cursed with the hard-knock life growing up as the son of a wealthy governor and auto executive," says Perez, as she wipes away fake tears.

She also bluntly says why he has little support in the Latin@ community.   "Your policies suck."

You know Rosie, that's the same reason a large majority of African-Americans ain't voting for Willard either.

Besides, we like the African-American family that currently occupies that nice house our ancestors built with their unpaid labor at 1600 Pennsylvania Avenue and want them there until January 20, 2017..