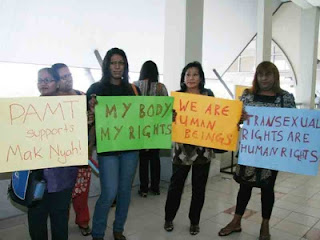 I wrote about the four Muslim trans women in Malaysia who were challenging Section 66 of the country's Islamic criminal code that bars Muslim men from dressing or posing as women.

Section 66 of the state's Islamic Criminal Code states that “any male person who, in any public place wears a woman's attire or poses as a woman shall be guilty of an offence and shall be liable on conviction to a fine not exceeding RM1,000 ($325.USD) or to imprisonment for a term not exceeding six months or both.”

That section of Islamic law has been used by fundamentalists (surprise, surprise) to harass transwomen living in that country. and the four Muslim transwomen challenged it on the basis they have a medical condition, it was in violation of their federal constitutional rights as Malaysian citizens and Section 66 did not apply to people diagnosed with gender identity issues.

“The undisputed medical evidence shows the applicants are biologically male but psychologically female. Thus, it [the law] is not applicable to them.” said lawyer Aston Paiva

In the October 11 ruling that has alarmed people in Malaysia,  High Court judge Datuk Siti Mariah Ahmad dismissed the Section 66 challenge by the transwomen, stating Muslims cannot be exempted from Sharia legal provisions.  She also ruled that Part II of the Malaysian Federal Constitution - which guarantees Malaysians fundamental liberties such as equality before the law, freedom of religion, and which prohibits slavery and enforced labor among others - is exempted by Section 66 of the Negri Sembilan Syariah Criminal Enactment 1992, according to lawyer Aston Paiva, who represented the transsexuals.

There was also some transphobia at play here.

Thilaga Sulathireh, an activist who helped them bring the case to court, said the judge refused to overrule the ban. Malaysia has a dual-track legal system with Sharia courts administering certain matters for Muslims.
"The (judge) said they are born male, they are still male and so the law applies to them... She said cross dressing is condemned in Islam," she told AFP.

Civil liberties lawyers in Malaysia are concerned that the ruling against the four transwomen is only the latest case in a troubling trend in which Islamic law is supplanting the Malaysian Federal Constitution as the country's supreme law.

“Islam is the religion of the Federation, but that does not mean that 'Islam', or what the authorities deem as 'Islam', supersedes other Constitutional provisions,” Civil liberties attorney Syahredzan Johan said.

It's another legal blow that Muslim transwomen have taken in this conservative nation's courts.   Last year another High Court refused to grant a name change for 26 year old  post operative transwoman Aleesha Farhana.  She died  weeks later from a heart attack

The transwomen are disappointed and distraught over this ruling, but are considering appealing it..
.
,
Posted by Monica Roberts at 2:30 PM