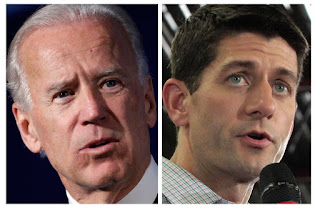 It's the Thrill In Danville, KY at 7 PM CDT, aka the Vice Presidential Debate between Vice President Joe Biden and challenger Rep. Paul Ryan.   Hopefully this will be more fun to watch than seeing last week's first presidential debate in which Mitt Romney lied for over and hour and a half and the POTUS admitted on the Tom Joyner Morning Show yesterday he was too polite in not responding to the non-stop lying.Mittens was doing.

While presidential debates usually don't determine who wins the election, this one may have the potential to do precisely that.   It's also going to be one that is watched by much of the American populace.

The 90 minute debate at Centre College will cover foreign affairs and domestic policy topics. Unlike last Wednesday’s presidential debate where both candidates stood behind podiums on a stage, in this debate, both candidates will be seated at a table for this discussion.

And hoping debate moderator Martha Raddatz of ABC doesn't allow herself to get run over and bullied ilike Jim Lehrer did.
Posted by Monica Roberts at 12:00 PM