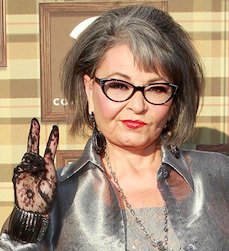 The passage of this weekend not only didn't lessen my anger about Roseanne Barr's jacked up transphobic tweets I put her and Kola Boof on blast for Friday, it poured gasoline on the smoldering anger I felt about it when I discovered this wasn't an isolated incident of transphobic bigotry coming from her.

From 'Roseannearchy: Dispatches from the Nut Farm'

“Then the Transgendered versus the Butch Dyke wars started—to see two of those folks fighting about being female was quite an eye-opener for me. You haven’t lived until you have seen a huge guy with boobs talking about female hormones and deciding to keep his penis, and how that was a feminist issue.” – Roseanne Barr

Umm hmm...guess you'll be telling jokes from The Land next year.

I find it laughable that you and your whyte radfem womyn gone wyld allies are bloviating about angry tweets aimed at you from righteously angry trans women reacting to the negativity your vanillacentric privileged behind put out there.

Keep crying those White Women's Tears.  It ain't working because you privileged white feminists started this War on Transwomen beck in the 1970's and we're beyond tired of it.

Thanks to the Net trans women and our cis feminine allies now have the ability to return your transphobic rhetorical fire just as quickly as y'all put it out there.  Some of my trans sisters don't really care at this point if it hurts your feelings and tweaks your delicate precious nerves.  You damned sure didn't care about our feelings when you let fly with those comments and we see you and your feminist buddies as worse than our right wing conservafool oppressors.

News flash, Roseanne.  The bathroom predators you rail about are cisgender people attacking trans people.  Bottom line is that your pimping of that demonstrably false bathroom predator meme has deleterious and real word effects on trans people's lives.   It not only fuels anti-trans hatred, but in some cases results in anti-trans violence aimed at transwomen and the people who give a damn about us. 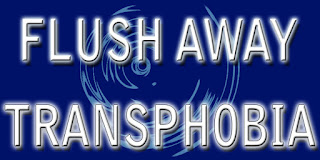 Roseanne's clueless pushing of the bathroom predator meme is not only pathetically sad, it's par for the white feminist course.

As long as it's transwomen, and especially non-white transwomen who are getting assaulted and killed, you don't give a rats anus that it's happening, nor are you concerned about doing anything to eradicate it.

Well, I am concerned about it and I do care what's happening to my sisters because there but for the grace of God go I in that situation.

Your ill considered tweeted words needlessly poured gasoline on this testy situation and will lead to hatred and potential assaults not only aimed at us, but cis women who don't fit the Femininity Police standards on what and how a woman should look like and present herself in public. .

The trans women and the masculine appearing cis women who will experience those assaults will have you Roseanne and your radical feminist buddies to thank for it.