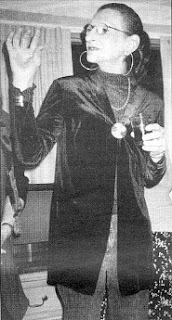 I have to thank Nephew (AKA Jaison Gardner) for giving me the idea for this post..   Since it's TBLG History Month, he'd asked the question on his Facebook page what people thought were some of the pivotal events, people, and cultural events in LGBT history.

After contributing a few comments to the thread on Jaison's page I decided I needed to do something similar focusing on the trans end of the rainbow community historical spectrum.

I'll focus on the USA trans community in this one.   I'll do an international trans one as well.

Ahem. Let's get this historical party started shall we?

For our trans ancestors we still don't know about yet


The February 1953 arrival in New York of Christine Jorgenson from Denmark which is the beginning of American media and international attention on trans people.

The 1965 Dewey's Lunch Counter Sit In in Philadelphia, the first instance of a protest based on gender variant issues.

The Compton's Cafeteria Riot in 1966.

The trans initiated Stonewall Riots in 1969

Phyllis Frye beginning her role as the Grandmother of the trans rights movement with the August 1980 repeal of the Houston anti-crossdressing ordinance.

Althea Garrison becomes the first transperson to be elected to a state legislature in November 1992 when she wins her race for a Massachusetts House seat.

The Littleton v Prange Case in 1999

Vicky Kolakowski becoming the first out transperson elected to a judicial seat in 2010 (Alameda County, California).

The 2005-2006 Transsistahs-Transbrothas Conferences in Louisville that led to other African-American themed trans conferences.

Jane Fee becoming the first transperson to attend a major political party convention at the 2000 DNC.

Kye Allums becoming the first out transperson to compete at a Division I NCAA institution in 2010.


Will probably keep adding to this one..