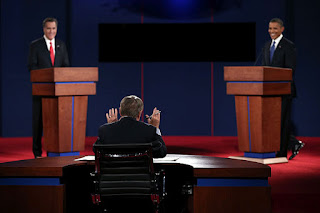 We had a disappointing result from the presidential debate in Denver Wednesday night with Mitt Romney being declared the winner of this first debate.

I'll let Franklin Delano Roosevelt give you the play by play of Mitt's performance .

And remember, there are three more debates this month, so stop trippin'.

So while the Republifools high five themselves and claim their back in the race, we're still waiting for the polls to come out and see if their post debate gloating is justified.

But the bottom line is we have work to do people.  Keep registering folks, talking to your friends and neighbors in your influence circles about the issues in this campaign and election season and encourage them to vote on November 6 or whenever early voting starts in your state.

It's Friday, and you longtime TransGriot readers know what happens on this day at noon CT.   I shine a bright spotlight on the fool, fools or groups of fools who deserve our illustrious award.

First honorable mention goes to Mitt Romney for his Oscar award winning performance Wednesday night of a moderate politician after spending 18 months being a 'severely conservative' one.

Second honorable mention goes to President Obama and his campaign team for letting Mitt get away with lying for 90 minutes in the first place.

Third honorable mention goes to Rep. Barney Frank (D-MA) who has been on the wrong side of a lot of trans issues now jumping in on the Kosilek case.

This week's winner is John Sununu.  The co-chair of Mittbot's KKKampaign put on his white sheet and engaged in some unrepentant race baiting aimed at President Obama as he made the talking head show rounds Thursday to gloat over Willard's win in the wake of the debate.


Visit NBCNews.com for breaking news, world news, and news about the economy


The president is 'niot that bright?    Stop projecting and hatin' John.  Think you're describing yourself.

All together now people, John Sununu, shut up fool!