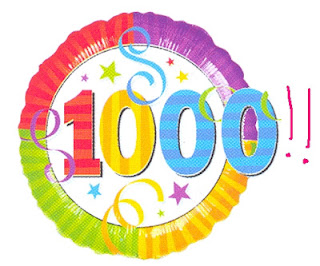 It's not even Election Day yet and you're looking at the 1000th post I've written this year.

And note, that's just on my blog.

That makes the third straight year since 2010 that I've written that many posts, and that was also an election year in which.I finished with 1260 when the clock hit 11:59 PM CST.

I doubt I'll exceed that number of posts by the time we hit New Year's Eve 2012, but I still have eight weeks left in this year.  I was actually trying to at times back off from that frenetic writing pace I had last year. I wanted to actually leave some time for me to chill, live my life, hang out with my friends and strictly limiting myself to three blog posts per day was a way in my mind to do that. .

Who was I kidding?

This was a presidential election year, and news events here and around the world sometimes demand that I write more than three per day.   My status as an IFGE Trinity winning activist and major blogger sometimes meant that I needed to add my Afrocentric comments on issues of importance to the trans community.

And yes, sometimes I'm in hard solid thinking mode about something and it inspires me to write a post I have to put down for posterity or something happens that pisses me the hell off and I need to vent.

One post you will see on New Year's Eve is my 2012 Shut Up Fool of the Year one, and I'll have it out in time for you to read it before you get your New Year's Eve party and drink on.

And before I end this one, thank all you TransGriot readers who have surfed by here over the years and spent your valuable time reading what I have to say about the world as I see it.  I deeply appreciate it.