I've Voted, The POTUS and FLOTUS Have Voted, Have You? 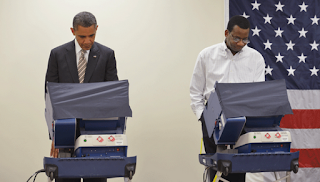 Early voting is going on in many locales in the United States in advance of our critical November 6 presidential election.

President Obama went back to Chicago last week to early vote while First Lady Michelle Obama did so via absentee ballot.

The POTUS and FLOTUS have already early voted.  Have you done so yet?  If you have, I thank you very much for exercising your civic duty as an American citizen and making you voice heard.

If you haven't and are eligible to do so, here's my commentary on that via Maya Wilkes from the dearly departed but beloved show Girlfriends. 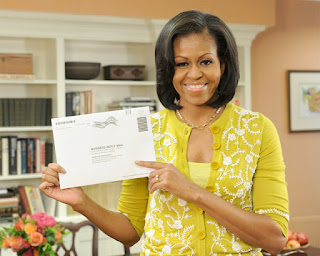 Why the hell have you not taken your soul to the poll yet?  This is a potentially American history altering election that demands you cast your ballot if not for you, for the people who can't vote.

I handled my early voting electoral business last Monday on the first day we were able to do so in the Lone Star State.

I wasn't kidding when I wrote I was pissed off and highly motivated to fire Republicans at the ballot box.

Got up, got dressed and walked to my nearby early voting polling station on a beautiful Houston chamber of commerce weather day.   I arrived there at 8:30 AM CDT to happily discover there was a line around the corner and out the door of the room housing the eSlate machines that was rapidly growing.

It took me 40 minutes, but my electoral business is handled. 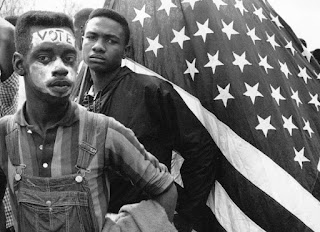 That was 20 percent higher than the previous record of 39,201 cast four years ago.   Speaking of Texas early voting, you have until Friday, November 2 to get your early voting business done.

While we liberal-progressive peeps were successful at legally pimp slapping the racist Texas voter suppression law into oblivion, the Teapublicans unfortunately killed our 'souls to the polls' weekend before election day.

So handle your electoral business TransGriot readers.   Don't make me send Samuel L. Jackson after you.