This Is What A Commander In Chief Looks Like 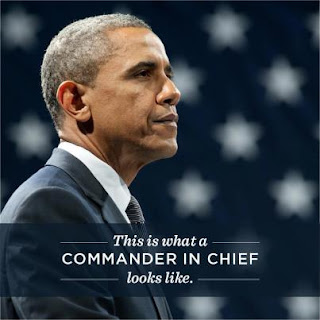 And there's a certain slice of the US electorate that has a major problem with the fact that the President of the United States of America and the Commander in Chief of our armed forces is African-American.

Frack 'em.  They are also the same Fox addled low education idiots who think in their bigoted minds that in his fours year on the job he hasn't done jack and is the 'worst president ever'.

yeah, all the presidential brother did was stop our country's slide into a second Great Depression, save the US auto industry from collapse, pass comprehensive health care, repeal DADT, pass the Byrd-Shepard hate crimes Bill, the Lilly Ledbetter Fair Pay Act, repair our diplomatic relationships with the world Junion and friends messed up, end the Iraq war, and get Osama bin Laden and 30 of his top al-Qaeda lieutenants..

And yeah, he knows more about foreign affairs than the shape shifting Republican nominee that changes his policy positions faster than his underwear and has the respect and admiration of the planet.

So keep on hatin'.   This is what our commander in chief looks like .