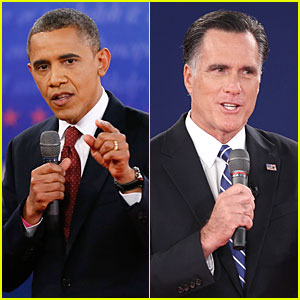 The problem for Mitt Romney was that 2007-2008 Obama was in the room and proceeded to spank that azz.

It was a town hall style format in which the questions came from the audience, and this time President Obama challenged Mitt Romney from the outset.   Romney also tried to run over moderator Candy Crowley like he did with Jim Lehrer two weeks ago in Denver and she wasn't having it.

Neither was President Obama, who called Romney's butt out every chance he got and mentioned the issues he left on the table in Denver to the frustration of his base.

The POTUS was on his debating A game last night while a flummoxed Mitt Romney made some unforced errors.   The critical one came when Mittens thought he had the POTUS cornered on a question pertaining to the Benghazi, Libya consulate attack and he was embarrassingly corrected not only by President Obama, but called on his lie that the president never called the Benghazi attack a terror one by moderator Candy Crowley.   President Obama also called Mittens butt out for playing politics with the issue as well and called it offensive his insinuation that the POTUS or any member of his administration would play politics with a situation in which 4 diplomats died.


Mittens also got called on his immigration policies when the POTUS pointed out his campaign adviser was Kris Kobach, the author of the Arizona SB 1070 law Romney called 'a model for the nation'.

In the final question of the night Romney opened the door for the president to use the 47% comment against him and the POTUS whacked Romney with it in his closing statement as the debate ended..


President Obama was on a mission last night and he accomplished it.  He confronted Romney on his lies, vigorously defended his administration and his policies, fired up the base, and convincingly won this second debate.  Now we'll see not only how the conservafools spin this debate, but which way the polls go in reaction to this Obama win.

They're already attacking Candy Crowley, so that means they think Mittens lost.

The October 22 debate in Boca Raton, FL with its focus on foreign policy will definitely be a fun and critical one.  Whether it determines the outcome of the election remains to be seen.
Posted by Monica Roberts at 12:00 AM