GOP Voter Suppression Billboards Up In Ohio and Wisconsin 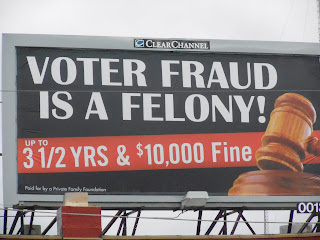 You just knew the Teapublicans in their racist desperation to defeat President Obama wouldn't put all their political eggs in the passing of voter ID suppression laws basket knowing there was a possibility they would get struck down in the courts.

They had Plans B,.C and D as well in the works to accomplish their goal of making President Obama a one-term POTUS by jacking with the coalition of senior, students, non-whites and white liberal progressive voters that swept him into office in 2008.

The GOP cranked up their voter suppression machinery and prepared for the November 6 election by training and planning the deployment of partisan poll watchers looking for voter 'iiregularities'.  Their True the Vote vigilantes were filing lawsuits and browbeating election boards trying to challenge registrations.   In addition to training their True the Vote vigilantes to harass people in Black and Latino precincts, in other GOP controlled states such as Florida the were attempting to pass voter ID voter suppression laws and illegally trying to purge people from the voting rolls less than 60 days before this critical election.

Why?  In order to shave off enough votes to swing states to the Romney-Ryan ticket.

It fits with the Republican motto: If you can't beat 'em, cheat 'em.

The latest reprehensible Suppress the Vote activity is these billboards paid for by a shadowy foundation that are popping up in African-American and Latino neighborhoods in Ohio and Wisconsin.  They are designed to 'scurr' people into not casting ballots in this critical presidential election.

The billboards in question are owned by Clear Channel, a conservative leaning media corporation that has been owned by Bain Capital since 2008.  Clear Channel's radio stations right wing talkers Rush Limbaugh, Sean Hannity, Glenn Beck and others..

It also shouldn't surprise you that fourteen directors of Clear Channel since 1994 have donated over $700,000 to Romney campaigns since 1994, with much of the money being donated in this current presidential election cycle..

ColorofChange has a petition up demanding the billboards be taken down, which they are refusing to do..

Stay tuned to see what happens with those billboards.  Speaking of those billboards, don't let them dissuade you or anyone else you know in your 'hood who is eligible in this election to bumrush the polls and cast your ballots to fire the Republicans who arrogantly tried to suppress your precious right to vote.

Like Rev. Al said in his MSNBC commercials promoting his show, I stopped being scared of the boogeyman before I exited elementary school and I'm damned sure not 'scurred' of Republican True the Vote bullies trying to suppress my vote.   And may I remind you misguided conservapeople that harassment of voters is a punishable felony offense.

In fact the more you Tea Klux Klanners engage in this anti-American behavior the more you're pissing me off and ensuring I'm showing up to cast that ballot.  Take your soul to the polls and a few friends with you.

But it's just another concrete example of why African-Americans and increasingly Latin@s have no love for the GOP..