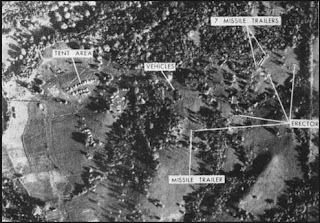 On this date in 1962 a USAF U-2 reconnaissance aircraft mission flown by Major Richard Heyser took 928 photos in six minutes over the San Cristobal, Cuba area.   His flight captured images of what turned out to be a Soviet SS-4 medium range nuclear missile site under construction.

That discovery triggered what has become known as the Cuban Missile Crisis.  It was thirteen intense days in which the US military went to Defcon 2 alert for the first and only time in its history, and the world nervously watched as the United States and Soviet Union came dangerously close to global nuclear war. 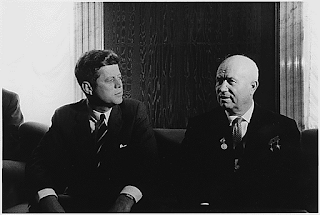 The TransGriot was a mere five months old when all of this drama was unfolding, and the SS-4 missiles were there as part of Operation Anadyr, the Soviet mission to secretly introduce three MRBM and two IRBM regiments to Cuba that totalled 80 missiles, Ilyushin Il-28 Beagle medium range bombers, and the troops, SA-2 surface to air missiles and MiG fighters to protect those installations.

There was an advance guard of four Foxtrot diesel-electric attack subs deployed each armed a 10 kiloton nuclear-tipped torpedo.  Ominously they were issued conflicting rules of engagement before leaving the Soviet Union as part of the plan to establish the forward deployment ballistic missile sub base at Mariel.

Khrushchev and the Soviet leadership were not too happy about being surrounded by American Jupiter missiles based on the soil of NATO allies such as Turkey and the Polaris missile sub base at Holy Loch, Scotland.

Because of the then Soviet leader bragging that their factories were producing nuclear missiles 'like sausages' the perceived missile gap became an issue in the 1960 Nixon-Kennedy presidential campaign that once Kennedy won the presidency, he began to address it by expanding what was in reality an American missile lead. 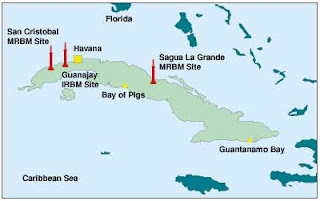 The increasing hostility between Cuba's Fidel Castro and the US, the failed 1961 Bay of Pigs invasion and Castro's embrace of communism and seeking out the Soviets as an ally against the American bully gave the Soviet Union an opportunity to redress the missile gap imbalance as they saw it.

The USSR would do so by installing ballistic missiles into Cuba, setting up a forward deployment naval base at Mariel similar to Holy Loch for their ballistic missile subs and keep it secret until the IRBM and MRBM missile launch sites were operational.  That would force the Americans and President Kennedy to accept the fait accompli situation.

But a complex and large undertaking such as Operation Anadyr wasn't going to remain a secret forever, and enough intel started leaking out of Cuba to the point that the CIA began stepping up U-2 overflights of the island in August 1962 with the missions being taken over by the Air Force two months later.. 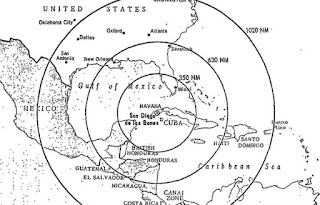 The Cuban Missile Crisis was thirteen days of nerve racking military moves, countermoves and diplomacy at the United Nations and behind the scenes.  Florida became a staging ground for a major US military buildup and what would have been had it been launched the biggest amphibious invasion since D-Day.

In the hindsight we thankfully have today, the ground invasion would have been a disaster.  Little did we know at the time there was a 40,000 man deployed Soviet motorized combat brigade in Cuba armed with 12 nuclear tipped FROG-2 battlefield missiles and orders that allowed the Soviet commander on the scene to use them without getting clearance from Moscow first.


The US military at the beginning of the crisis went on Defcon 3 alert as B-52 bombers and Polaris ballistic missile subs were dispatched and ICBM's were prepped for launch.  ExComm met at the White House as the hawks and doves debated and argued over what to do about the situation. 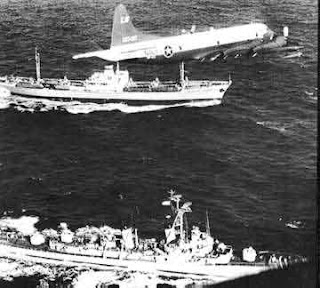 President Kennedy eventually settled on a naval blockade as a first step short of launching the bombing raid and invasion of Cuba to remove them.

The news that missiles were in Cuba was announced to the American public and the world during an October 22 White House address to the nation.

As the announcement to the American public and the world of the quarantine zone and its establishment by US naval forces was occurring 27 Soviet ships were steaming toward it as the world watched and wondered if World War III was imminent.

On October 23 the first hopes that sanity was breaking out occurred as several Soviet ships approaching the quarantine line stopped and turned back.

But the crisis was far from over.  While political pressure was mounting with the November 1962 midterm elections fast approaching, and our hawks including SAC commander General Curtis LeMay were pressuring President Kennedy to use military action to remove the missiles, on the other side Castro was urging Khrushchev to use the missiles if Cuba was invaded. 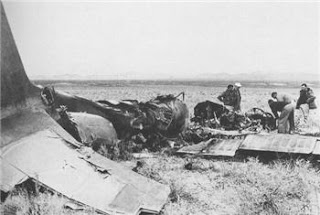 An Air Force U-2 reconnaissance plane being shot down over Cuba on the orders of a local Soviet commander on October 27 only added to the stress level the leaders of both superpowers faced.

A new message was received from Moscow offering a deal by which the missiles in both Turkey and Cuba would be removed and the USA and Soviet Union would jointly guarantee the security of both nations.

President Kennedy insisted that the missiles in Cuba must be removed, offered to end the naval blockade and pledged not to invade Cuba if that happened.  If the deal was rejected, the US would commence with the invasion of Cuba in 24 hours  .

But when the message was delivered to the Soviet ambassador in Washington, Attorney General Robert Kennedy added a private message that once this was done, the Jupiter missiles in Turkey that was one of the Soviet sore points instigated the crisis would be withdrawn a few months later. 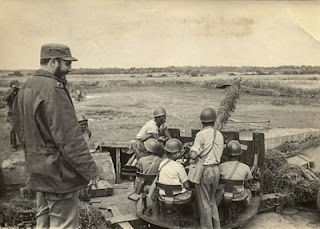 The deal was done, Khrushchev announced on October 28 they were withdrawing the missiles from Cuba to the disgust of Castro, the crisis wound down over the next few months and in April 1963 the Jupiter missiles were quietly withdrawn from Turkey.

The 'hotline' between Washington and Moscow was installed to ensure rapid direct communications in future conflicts between the two superpowers. The Nuclear Test Ban treaty was negotiated and eventually signed and the world exhaled afer coming dangerously close to nuclear annihilation.