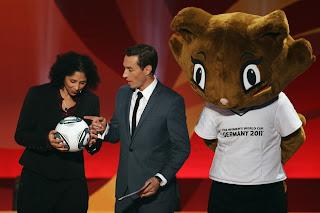 On Monday the draw to put together the groups for the initial phase of the 2011 FIFA Women's World Cup was held in Frankfurt.

The only thing we knew going into the draw that happened at 12:00 PM CST my time yesterday was that two time defending FIFA women's world champion and host nation Germany was in Group A.

That's a nice segue into who the other members of that group will be.  Canada, Nigeria and France are the other three nations in what has turned out by some soccer analysts reckoning as the 2011 FIFA women's tournament's 'Group of Death'.

Group B is comprised of Japan, New Zealand,  our southern neighbors Mexico and England

Group C is consider by some analysts to be the other tournament 'Group of Death' and is made up of the United States, North Korea, Colombia and Sweden

To break down what this all means, check out the analysis from the Women's Professional Soccer website


The 2011 Women's World Cup will kick off June 26 with the two time defending champion Germans playing in Berlin's Olympic Stadium against Canada. 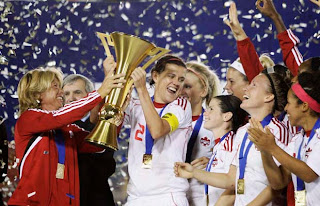 Our Canadian neighbors are pissed because they didn't get a top seed despite winning five straight matches to take the CONCACAF title.

Send your attack beavers to FIFA headquarters, people.   They made the decision to go by world ranking, which is how the number one ranked Team USA got one of the group seeds despite having to do the two leg playoff with the Italians to get in. .


After that opening match in Berlin with the Germans, Canada's Group A tournament road doesn't get any easier.  They take on France in Bochum on June 30 and finish July 5 with the Super Falcons of Nigeria in Dresden.

Mexico takes on England in Wolfsburg on June 27, Japan in Leverkusen on July 1 and closes Group B play with their math against New Zealand in Sinsheim on July 5 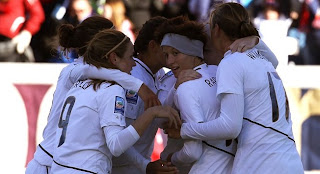 The first Group C match for FIFA number one ranked Team USA will be on June 28 in Dresden against North Korea.   They'll then face off July 2 in Sinsheim against Colombia and finish group play in Wolfsburg on July 6 against Sweden

Top two teams in each group go to the knockout  round and we'll need to be paying very close attention to what's going on in Groups A and D.

If Team USA wins Group C, they'll be matched up against the Group D runner up on July 10 in Augsburg.    However, it would also be in the upper half of the bracket with the Group A winner.  If Team USA is the runner up, they would play the Group D champ in Dresden on July 10

If things break right for Team USA and they keep winning, the defending 2008 Olympic champs will hopefully find themselves in Frankfurt on July 17 playing for their third world championship.

15 other teams have that same dream, and we''ll see in a few months how this all plays out.

Told y'all it's not just the TransGriot saying that it's past time for a unified African descended trans community, and that this decade would be the 'Decade of the AA Transperson'.

The Black Trans Revolution will not be televised and is already underway.

Posted by Monica Roberts at 4:02 PM No comments: