Alveda King Does Not Speak For Dr. King 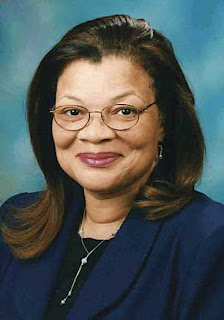 I have never liked that Oreo cookie chomping sellout Alveda King, and had the displeasure of crossing paths with her while I lived in Louisville.

Back in 2004 when we were trying to get the GLBT protective Fairness Ordinance reauthorized because of the city-county merger that happened in 2002, she was brought to town along with three other conservafools by our opponents who laughably tried to pass them off as Louisville 'residents' arguing against the reauthorization by Metro council.

Hell, I had more credibility as a Louisville resident at the time than Alveda King ever did and was pissed I couldn't participate because I had to work.

King got called out by Dawn that night on some Scripture she misquoted during her presentation, and the subsequent reauthorization vote the next day went lopsidedly in our favor.

She surfaced again at Glenn Beck's 'I Have A Scheme' weekend in order to try to claim the mantle of her uncle martin's legacy for the conservafool movement.

Not no but HU-ELL no. 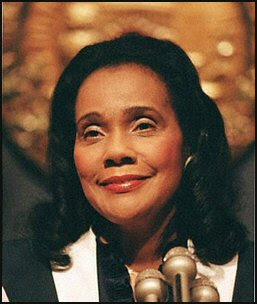 Coretta Scott King said this a few days before the 30th anniversary of his assassination on March 31, 1998.

"I still hear people say that I should not be talking about the rights of lesbian and gay people and I should stick to the issue of racial justice," she said. "But I hasten to remind them that Martin Luther King Jr. said, 'Injustice anywhere is a threat to justice everywhere.'"

"I appeal to everyone who believes in Martin Luther King Jr.'s dream to make room at the table of brother and sisterhood for lesbian and gay people," she said.

"Gays and lesbians stood up for civil rights in Montgomery and Selma, in Albany, Georgia, and St. Augustine, Florida, and many other campaigns of the civil rights movement," King said.

She said she saluted the contributions "of these courageous men and women" who fought "for my freedom at a time when they could find few voices for their own."

Alveda, your message of hate radically conflicts with your uncle's message.  In addition, you are on the wrong side of the moral arc of history.

I'll take what your late Aunt Coretta Scott King has to say over your sellout behind any day.