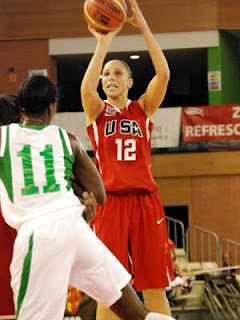 The Team USA women were more than a little upset about the way they played last night in their 83-77 loss against the defending FIBA world women's champion Australia.

They took out their frustrations on Senegal, who they will see again in Group B pool play on September 24 when the FIBA Women's World Championships start on September 23.

Team USA outrebounded Senegal 48-23, forced 23 turnovers, and dished out 22 assists and was in command of this game from the opening tipoff.

Hey, save some of this butt kicking intensity and focus for the tournament!

Senegal's only lead of the game was at the 8:36 mark of the first quarter after nailing a three pointer to give them a 3-2 lead. Team USA responded with a 23-2 run to take command of the game and end the quarter with a 31-8 lead which ballooned thanks to the second unit to 50-25 by halftime. 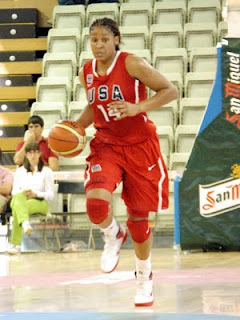 The three point barrage started after halftime and allowed Team USA to expand the lead to 79-37 by the end of the third quarter.

And yes, women's b-ball fans, Maya Moore was back in the Team USA lineup. She had a double-double with 13 points and 10 rebounds. Diana Taurasi led all scorers with 14 points and five assists on 6 for 7 shooting in just 15 minutes of play. Kara Lawson tallied 13 points on 5 for 5 shooting from the field, including 3-of-3 from 3-point land. Lindsay Whalen chipped in 11 points on 5 for 5 shooting as well. Tina Charles contributed 10 points and six rebounds and Seimone Augustus added 10 points and four assists.

Coach Auriemma was pleased with Team USA's performance. "I thought that defensively we were much better than we were last night. Obviously the level of competition was much different. We are much more talented than Senegal. I don't want us to be dependent on that. Hopefully what we brought to the defensive end today is going to be more indicative of how we're going to play. It's evident that unless we're committed, especially on the defensive end, it's going to be very difficult to reach our goal of winning the World Championship." 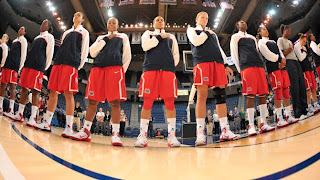 Team USA closed out the exhibition schedule with a 3-1 record, but they do have a September 20 scrimmage in Brno with FIBA women's tournament hosts the Czech Republic.

The 12 member FIBA women's tournament team rosters have to be finalized the next day, and bear in mind Sue Bird, Swin Cash and Angel McCoughtry will join the team in the Czech Republic. Sylvia Fowles is day to day after having arthroscopic knee surgery. Coach Auriemma and staff have some tough decisions to make in terms of who will be the last twelve women standing.

Group B pool play starts in Ostrava on September 23 against Greece, followed the next day with the game against Senegal and closing on September 25 with France.

Will Team USA be ready to play and take the championship and the automatic bid for the London Games back home? If they play like they did today, the answer is probably yes.
Posted by Monica Roberts at 9:00 PM