2010 Texans Watch-This Time It Counts In the Standings 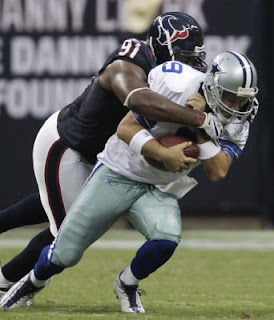 After beating the Washington Redskins in 30-27 overtime after coming back from a 17 point third quarter deficit, my fave NFL team takes its unblemished record into Reliant Stadium on Sunday against that 0-2 NFL team north of here.

Next to the games with the Indianapolis Colts and the Tennessee Traitors, this NFL Week 3 date has been circled on the calendar by Texans fans ever since the schedule was released.

The last time they ventured down I-45 south they tasted a bitter 23-7 defeat. The Cowchip fifth column did much long and loud whining in the wake of that butt kicking saying it would be a different story when the regular season arrived.

Umm hmm. The regular season is now in its third week. When are y'all gonna start playing NFL football?

On second thought, I want y'all to continue playing sorry piss poor football like y'all have been for the last two weeks against the Redskins and the Bears.
Posted by Monica Roberts at 12:01 AM