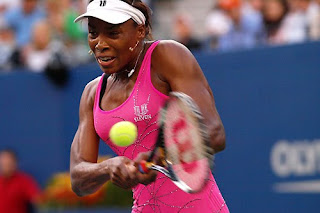 it's been a struggle at times, but Big Sis has battled her way through this 201 US without her sister by her side. The doubles teams of the tennis world are breathing a sigh of relief until Little Sis' foot heals.

She got one step closer to her first US Open final since 2002 by beating 2010 French Open champ and sixth seeded Francesca Schiavione of Italy in a hard fought 7-6 (7-5), 6-4 quarterfinal match.

While her serve has been shaky for most of this tournament, she still hasn't dropped a set in advancing to her first US open semifinal since 2007.

Here's hoping Big Sis has a better result against Clijsters than Serena did last year.
Posted by Monica Roberts at 3:00 PM