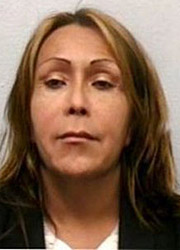 You may remember I posted the Myra Ical vigil video a few months ago.  There have been recent developments in the case that may hopefully lead to the apprehension of her killer.

Cristan Williams received an anonymous letter in June at her Transgender Foundation of America office in June from a man who may have run into Ical's alleged killer.


According to KTRK-TV 13 a person who identified himself as "Matthew" in that letter describes two chance meetings with a man that happened in February at the Guava Lamp Bar on Waugh Dr. in February and at the South Beach Nightclub in Montrose in May.

The Houston trans community is concerned that Myra's killer is still on the loose and could kill again if he isn't captured..

If you're in the Houston area, are reading this post and have information concerning this Ical case,  Crime Stoppers is offering up to $5,000 for information leading that leads to the arrest of a suspect.