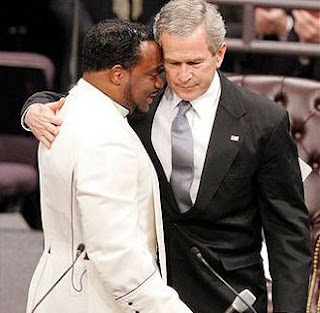 "God said, everybody in here that knows what's right but ain't practicing -- every woman that knows what to do but still wants to act like a 'woman of the 90s' that the world has described -- God says unto every man that knows what God is saying to do, and you're still acting like the boys on the corner, God says you deserve death!"     Bishop Eddie Long

I don't like megachurch ministers that preach the BS  'prosperity gospel',    Much of my distaste for it is rooted in my belief it has distracted them from fulfilling the Black Church's traditional role of speaking truth to power on behalf of the downtrodden and oppressed against the powerful.

Another of the trends that bothered me was starting in the late 80's early 90's observing many of these same large church pastors in cities across the nation suddenly started declaring themselves to be conservative Republicans. 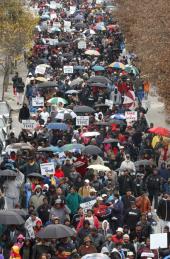 One of the megachirch ministers I had a special distaste for was Eddie Long.in the ATL.   In addition to his 'hate on gays' preaching, he bragged about his close GOP ties.   I also haven't liked him ever since he cranked up that 2004 anti-marriage equality march that started at the foot of  Dr. King's grave. Seeing pictures of him hugging George W. Bush sent my disgust quotient to genius level..

New Birth Missionary Baptist Church had such a negative anti-gay rep that Julian Bond refused to step inside its arena sized sanctuary in Lithonia, GA for the 2006 funeral of his best friend Coretta Scott King.

Now the clock's ticking on the start of this Sunday's highly anticipated service at New Birth to see not only what he's going to say with the unblinking eye of the nation upon him, but see if this homophobic hypocrite is going to step down from his position as senior pastor of the church..  .

And the Black GLBT/SGL community and our allies are gleefully watching every minute of his very public fall from grace.