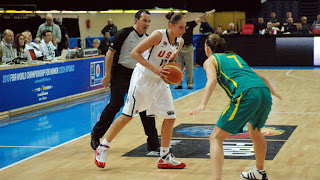 Number one FIBA ranked Team USA faced off for the top seed in Group E today against defending FIBA champion Australia in Ostrava with much at stake.

The winner would not only stay unbeaten in this 2010 FIBA world championship tournament, they would clinch Group E and the number one seed heading into the knockout round quarterfinals. 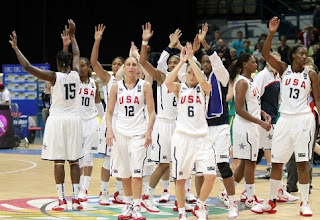 Sylvia Fowles added 15 points to go with her six rebounds and Tina Charles contributed 14 points to help the Team USA cause and extend their record against Australia in FIBA competition to 9-0.

Team USA moves on to Karlovy Vary and their day off needing only three more wins to achieve their ultimate goal of capturing the 2010 FIBA World championship.and that coveted qualifying spot in the 2012 London Games basketball tournament.

After the break Team USA kicks off quarterfinal play October 1 against Korea.  They would take on the winner of the France-Spain game in the semifinal should they defeat Korea.   Meanwhile the Opals face the homestanding Czech Republic and the survivor of the Belarus-Russia quarterfinal..

This may not be the last time we play the Opals, and if things break the way everyone expects, the next time Team USA and Australia clash, the FIBA title could be on the line.