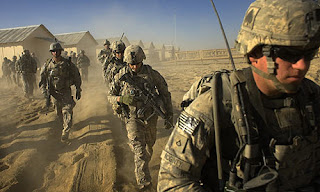 Can I call it or what?

This is what I wrote in my August 31, 2010 post entitled 'Conservafools: If You Really 'Support Our Troops', Stop Hatin' On Islam':

What the conservafools fail to realize is that the Internet runs both ways and this 'hate on Islam' rhetoric isn't occurring in a vacuum. Devout Muslims around the world have computers too and surf the web. They read what our right wing fools do, get rightfully pissed off and want to strike back at Americans.

And who are the Americans the adherents of Islam have the easiest access to attack? Our troops on the ground in Afghanistan and military personnel around the world.

That concerns me since I and other people have family members currently in the military. Those deployed in Afghanistan have a rough enough time there without you right wing idiots inciting and antagonizing the 1 billion people who are Muslims. 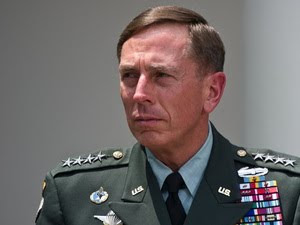 Yesterday General David Petraeus, the commander of our troops in Afghanistan, echoed what I had to say about the September 11 event.

He wrote an e-mail to reporters in which he warned that the actions of this Islamophobic Gainesville, FL church could be used by extremists in Afghanistan and around the world to “inflame public opinion and incite violence.”

“I am very concerned by the potential repercussions. Even the rumor that it might take place has sparked demonstrations such as the one that took place in Kabul. Were the actual burning to take place, the safety of our soldiers and civilians would be put in jeopardy and accomplishment of the mission would be made more difficult,” General Petraeus said. “It is precisely the kind of action the Taliban uses and could cause significant problems.”

NATO Chief Anders Fogh Rasmussen also criticized the plans, saying that burning Qurans violated the NATO alliance’s values. “There is a risk that it may also have a negative impact on security for our troops,” he is reported as saying.

It's not me, General Petraeus or the NATO alliance selling woof tickets. Just rumors or reports of US soldiers desecrating the Koran in Afghanistan and Iraq has caused bloodshed in the past In 2008 there were deadly protests in Afghanistan when an American soldier shot a copy of Islam's holy book full of holes. 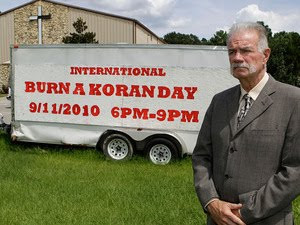 Now we have 'Pastor' Terry Jones and his Dove World Outreach Center about to jump something off that will have potentially deadly consequences not only for American troops abroad, but aid workers in Muslim countries as well.

So Muslim world, know that the vast majority of Americans of all faiths are horrified that this fool is attempting to desecrate the Quran and oppose it. Unfortunately our voices until recently have been drowned out by the Right Wing Noise Machine pimping Islamophoibia for midterm electoral gains.

If you want to focus on am American to be mad at, focus it on the fool who is stupid enough to jump this crap off by disrepecting your holy book in the first place.
Posted by Monica Roberts at 6:00 PM