No Rainbow Cupcakes Or Cookies Made At Indy Hate Bakery 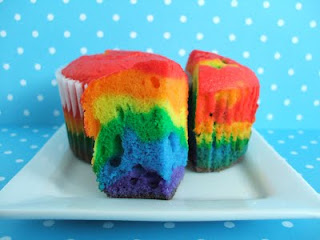 "I explained we're a family-run business, we have two young, impressionable daughters and we thought maybe it was best not to do that," said co-owner David Stockton to a local Fox television station. He then added that it's his bakery's decision to decide what is obscene. Apparently rainbow colors fall under that label. "We have our values, and you know, some things ... for instance, if someone wants a cookie with an obscenity, well, we're not going to do that."


Renee at Womanist Musings has commented on it, but had to shake my head at just how ridiculous the homophobia gets for low information and intelligence conservafools.

The gay student group at IUPUI  in Indianapolis went to the Just Cookies store in the Indianapolis City Market recently to order some rainbow cupcakes for the upcoming National Coming Out Day celebration on October 11.

But the students were shocked and surprised when their cupcake order was refused by the owner of the store.    They did however get another bakery to happily fill their order.

But it shouldn't have happened in the first place, especially in a location such as the Indianapolis City Market that was renovated with the use of tax dollars provided by all of Indy's citizens.

This kind of stuff is a prime example of why we have laws such as the 1964 Civil Rights Act and many others in place to prevent discrimination against marginalized groups, Rand Paul.

Hate to break it down to you conservafools, but 'The Market' is not a magic cure all for everything that ails the United States.   It damned sure doesn't work when it comes to dealing with prejudice, racism  and eradicating the doctrine of 'whiteness' in American society.

Some people have to dragged kicking and screaming into the 21st century and doing the right thing, and that what those anti discrimination laws are for.  You don't have to like me, but you do have to respectfully serve me when I come to your establishment with my hard earned dollars in hand, hire me if I'm qualified for an open job or make sure your establishment is ADA compliant if I have a disability. 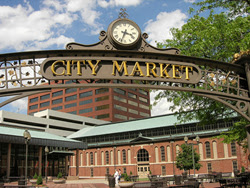 If you're wondering why people across the gay and transosphere and our allies are griping about an Indiana  homophobe refusing to sell rainbow cupcakes to a student group, it's because it's an example of the everyday slights and insults that wear on the souls of GLBT folks on a regular basis.

Those everyday slights, insults, slings and arrows that a GLBT person suffer with in silence build up and eventually lead to an explosion of anger when they get one slight too many piled upon them.

And I would hate to be you Mr., Mrs. and Ms. Homophobe when that particular GLBT person or the community they reside in has had enough.  .