2010 Texans Watch-Opening Against The Colts 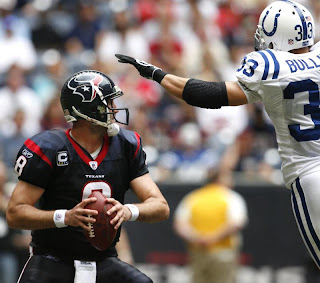 Since the Texans started NFL play in 2002, the Indianapolis Colts have caused them more drama, sleepless nights and nightmares than any team in the league.

They open the 2010 NFL season at Reliant Stadium with their archrivals in a season in which the Texans feel they are good enough to make the playoff after after having their first winning season with a 9-7 record and narrowly missing the postseason.

but to do that, the Texans know they must beat the Colts at least once. Twice would be Christmas come early for Texans fans.

They are 1-15 against their AFC South Division rivals with the one win coming on December 24, 2006 when the Texans defeat the Indianapolis Colts 27-24 at Reliant Stadium. The losses have ranged for blowouts to agonizing comebacks that led to narrow Colt wins.

Last season was no different in terms of the Colts adding to the frustration level of the Texans. The Colts had to score three touchdown late to beat them at Reliant on October 5.

Well, let's hope they can get their second win against the Colts today.
Posted by Monica Roberts at 12:00 AM