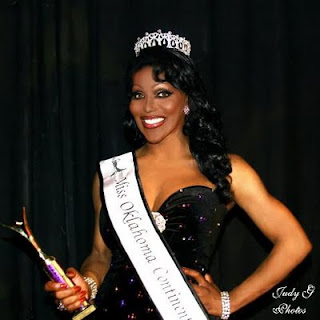 Last year Mokha Montrese finished as the first runner up to 2009-10 queen Armani, who finally achieved her personal goal of seizing the crown at the 30th annual Miss Continental Pageantin Chicago.

What a difference a year makes at the recently conducted 31st annual edition of the Miss Continental Pageant.

Mokha Montrese's story is a mirror image of Armani's Miss Continental history in terns of finally getting to wear the crown she's relentlessly pursued after all these years. She's another longtime Miss Continental contestant who has come agonizingly close in various years to winning the title.

The Miss Continental pageant is contested every Labor Day weekend in Chitown, so if you're interested in attending the 2011-12 version, better be ready to shell out the dough when the tickets go on sale because they don't last long.

Bu congrats to Mokha, and may you enjoy your reign you've worked long and hard to achieve.
Posted by Monica Roberts at 2:00 AM