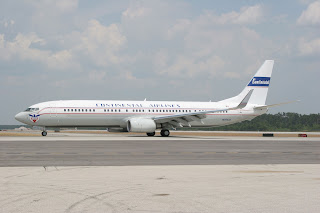 I spent 14 years working for Continental Airlines, and I like many past and present employees of the 'Proud Bird With The Golden Tail' are saddened that today is the last one that Continental will be flying around the world as an independent air carrier.

76 years of airline history goes away tomorrow as the Continental-United merger takes effect.  The merged carrier will be based in Chicago and bear the United name but keep the Continental golden globe logo and the CAL colors on its aircraft.


Tomorrow a new carrier emerges that will the largest airline in the world.  The stock gets merged tomorrow, but it will be a few years before the other physical changes like new uniforms, aircraft being painted over and signage replacement happens before the Continental name fades into aviation history for good.

The globe logo and the colors will endure for a while as the new logo and colors of the merged airline.

But for those of us who were part of its remarkable 76 year history and who busted our behinds to turn it from worst to award winning first during the 90's and keep it there, it will be a bittersweet day.