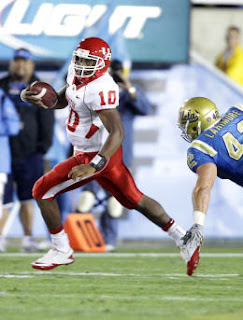 The Cougars went to Los Angeles last week ranked number 23 in the nation, its quarterback Case Keenum being considered for the Heisman Trophy and the school considered a potential BCS bowl busting program.

UCLA not only put an end to that talk with a 31-13 Rose Bowl butt kicking, they ended the seasons of Case Keenum and his backup Cotton Turner.

The Cougars bounced back with their true freshman quarterback Terrance Broadway at the helm as they returned to the friendly confines of the Rob to play the Tulane Green Wave.

Thanks to 113 yards and four Bryce Beall touchdowns, 173 passing yards from Broadway and timely interceptions from the Cougar defense,  Terrance Broadway's debut as the UH starting quarterback got rave reviews from the Cougar faithful.

The Coogs beat Tulane 42-23 to stay unbeaten in C-USA West Division play at 2-0 and extend their home unbeaten streak to 18 games.