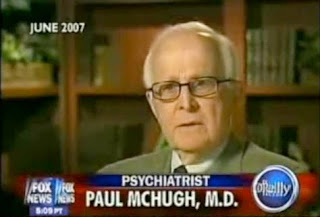 "The post-surgical subjects struck me as caricatures of women. They wore high heels, copious makeup, and flamboyant clothing; they spoke about how they found themselves able to give vent to their natural inclinations for peace, domesticity, and gentleness—but their large hands, prominent Adam’s apples, and thick facial features were incongruous (and would become more so as they aged)...." Dr. Paul McHugh 2004 Surgical Sex.

If you've noticed the spike in anti-trans rhetoric coming from the Catholic Church that has resulted in an increase in transphobia and hate violence crimes directed at transpeople in Latin America and other heavily Catholic spots on the planet, you have this man to thank for it.

You also have this man to thank for the 'transsexuality is a choice' meme that we have had to constantly fight as well.

But there is one group that he zealously defends. Catholic priests facing sex abuse charges.

Dr. Paul McHugh is another one of our longtime enemies of the trans community who first got the attention of our community in 1979. As then chair of the Johns Hopkins Psychiatry Department from 1975-2001 he shut down the Gender Program based on that infamous 1977 John Meyer study he ordered that claimed there was no real benefit to these services.

As a longtime critic of trans issues, McHugh has ties to neoconservative Catholic groups, was a member of the GW Bush Administration's President's Council on Bioethics, and is frequently quoted by anti-transgender groups such as NARTH and the Concerned Women for America.

McHugh claims responsibility for helping get J. Michael Bailey's anti-trans character assassination waste of trees The Man Who Would Be Queen published through the National Academy of Sciences.

He was tapped as the Vatican Advisor on trans issues and set the table for the current 'hate on transpeople' attitudes now prevalent in the Vatican since 2003 and now spreading like a cancer through the Roman Catholic Church.

Paul McHugh is also a supporter and proponent of Ray Blanchard's dubious autogynephelia theory that he created in 1989.

The "transgender" activists (now often allied with gay liberation movements) still argue that their members are entitled to whatever surgery they want, and they still claim that their sexual dysphoria represents a true conception of their sexual identity. They have made some protests against the diagnosis of autogynephilia as a mechanism to generate demands for sex-change operations, but they have offered little evidence to refute the diagnosis. Psychiatrists are taking better sexual histories from those requesting sex-change surgery and are discovering more examples of this strange male exhibitionist proclivity

McHugh not only leads the attacks on transpeople with a fanatical zeal, he did so against the late Dr. George Tiller to the point that in 2007 he was ordered by Kansas Attorney General Paul Morrison to cease and desist. The anti-Tiller public statements by him and others in the conservative movement led to Tiller's death.

McHugh has the blood of our brothers and sisters around the world on his hands as well, and is deserving of the antipathy heaped upon him in our community.
Posted by Monica Roberts at 12:00 PM