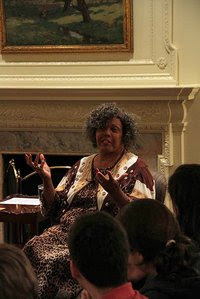 Miss Major is one of my trans elders and one of the few African-American Stonewall veterans still around as a living witness to that history. She is also an activist in her own right and advocate for trans prison rights in California and beyond that should have received an IFGE Trinity Award by now.

In 2008, Miss Major testified at the United Nations about the abuses of transgender women of color in the United States.

She began her transition in the 50's and ever since I met her at the 2005 Transsisters-Transbrothers conference in Louisville, I've been eager to hear and seek out that chocolate flavored trans history and wisdom from her perspective.

Stumbled across this story about a November 2009 chat she had at Yale University during Yale's Trans Awareness Week.
Posted by Monica Roberts at 12:00 PM