Team USA Women 2010 FIBA Worlds- We Have A Team 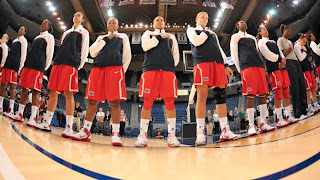 The twelve women that are going to represent FIBA number one ranked Team USA and attempt to bring an eighth championship back to US soil were named by USA Basketball today.

Moore is the only collegiate player on this FIBA World Championship squad predominately made up of WNBA and Olympic team ballers.

“The process has been unbelievably difficult. It’s taken a lot out of us, the committee, coaches, staff,” said USA head coach Geno Auriemma. “It was probably the most difficult time that I’ve had as a coach in 35 years. When you have to say goodbye to players as committed to USA Basketball as Kara (Lawson) and Seimone (Augustus) have been, it’s very, very, very difficult. But there’s so much uncertainty in our post players position that we had to make some very difficult decisions. I think the team that was picked is a terrific team. It’s a terrific group of kids and the next nine games will give us an opportunity to prove that.”

“This was an extremely difficult decision for the committee to make,” said USA Basketball Women’s National Team Director and USA Selection Committee member Carol Callan. “After four exhibition games and the scrimmage against the Czech Republic, we believe we have selected the 12 players who will make the best team to be competitive at the World Championship. These players fill various needs that this team has in terms of the international styles of play that we will face in the Czech Republic.

“Players not selected have been and remain a vital part of the USA National Team program and we appreciate the effort they gave throughout our training camps in helping the USA prepare for this important competition. Again, it was not an easy decision to make. Any combination of the 14 finalists would make a formidable team, which is why this was such a tough decision to make.”

They are 63-1 in recent international competition, and will also be attempting to get that automatic qualifying spot in the 2012 London Games women's basketball tournament that goes with winning the 2010 FIBA women's title.

Team USA opens FIBA World Championship play against Greece tomorrow at 12:00 noon EDT with all the games being telecast on NBA-TV. You can also watch all the FIBA games via live streaming at www.FIBATV.com.