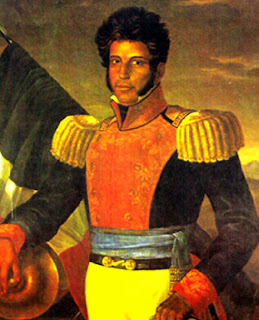 “If we succeed in protecting the rights of the individual, if equality under the law destroys the forces of power and money, if the primary title we use amongst ourselves is that of ‘citizen,’ if rewards are given exclusively for talent and virtue, then we have a republic, and it will be preserved through the universal suffrage of a solidly free and content people.” Mexican President Vicente Guerrero

Today is Mexican Independence Day and the beginning of the celebration of Mexico's bicentennial year as a nation. On this date in 1810 it declared its independence from Spain and began a long war for its independence that lasted until the Mexicans were victorious in 1821.

His name is Vicente Ramon Guerrero Saldaña, and he was Mexico's version of George Washington and Lincoln combined. He was a major military leader during Mexico's war For Independence and as president ended slavery in his nation on September 15, 1829 in addition to promoting

The President of the United States of Mexico, know ye: That desiring to celebrate in the year of 1829 the anniversary of our independence with an act of justice and national beneficence, which might result in the benefit and support of a good, so highly to be appreciated, which might cement more and more the public tranquility, which might reinstate an unfortunate part of its inhabitants in the sacred rights which nature gave them, and which the nation protects by wise and just laws, in conformance with the 30th article of the constitutive act, in which the use of extraordinary powers are ceded to me, I have thought it proper to decree:

1st. Slavery is abolished in the republic.
2nd. Consequently, those who have been until now considered slaves are free.
3rd. When the circumstances of the treasury may permit, the owners of the slaves will be indemnified in the mode that the laws may provide.

And in order that every part of this decree may be fully complied with, let it be printed, published, and circulated. Given at the Federal Palace of Mexico, the 15th of September, 1829. Vicente Guerrero To José María Bocanegra.

He was president of Mexico from April 1, 1829 until he was deposed by his vice president Anastasio Bustamante on December 17, 1829 in a right wing initiated coup, captured through deception in Acapulco and later executed in Oaxaca on February 14, 1831.

He is considered a Mexican national hero and his body is interred in Mexico City. The Mexican state of Guerrero on the Mexican Pacific coast is named in his honor along with the towns of Col. Vicente Guerrero and the Baja California town of Guerrero Negro.
Posted by Monica Roberts at 2:00 PM