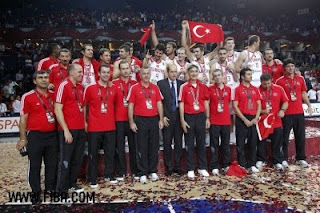 Turkey had an 8-1 run to the September 12 title game in the recently concluded 2010 FIBA World Championships before they fell to Team USA.

But one story that emerged in the wake of the FIBA silver medalists 81-64 loss highlights something that I have said repeatedly in different ways on this blog.

No matter where we live on Planet Earth, if you give a transperson a shot at doing what they love and leave them alone to live their lives, it not only pays dividends for the transperson, but also the societies in which we live. 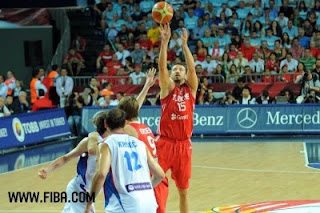 Meet Leyla Çalışkan, a talent scout for Turkish basketball. She discovered and trained Turkish NBA baller Hedo Turkoglu and several players on the Turkish national squad that made their nation proud and became known as the '12 Giant Men'.

Leyla was working at a local college pre-transition when she discovered Turkoglu and Kerem Tunçeri. Çalışkan’s “special situation” as she calls it was noticed at Çavuşoğlu College where she worked at the time and she was fired from her job. 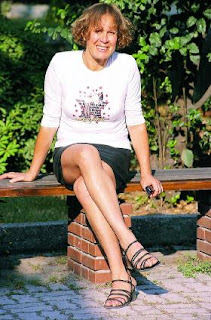 “I had not had the [sex-change] surgery yet [when they fired me], but I guess people were understanding [my situation],” she said in an interview published in the Turkish English language newspaper Hurriyet.

Çalışkan said she went through a very difficult and lonely period after she was fired and then decided to have the SRS she'd been postponing in order to keep her job. “However, I have never regretted having the surgery; I found my identity,” she said.

Her story does have a positive end despite the fact her prized pupils don't communicate with her. She is still doing the work she loves in terms of discovering new Turkish basketball talents and working as a coach.
Posted by Monica Roberts at 10:00 AM