Now that the 'menz' have finally ended their 16 year championship drought in the FIBA Worlds, time for me to turn the TransGriot spotlight toward our Team USA woman, who have handled their basketball business internationally when the men weren't.

The task of building on this recent run of success for the 2010 edition of Team USA women's squad falls upon the shoulders of UConn's Geno Auriemma and his staff for the FIBA Women's Worlds and the 2012 London Games. 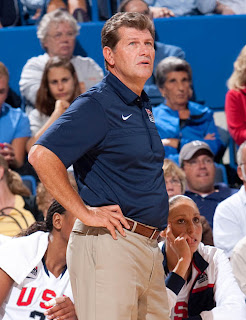 Team USA has been whittled down to 14 finalists, and the goal of the final 12 women left standing for our FIBA Number one ranked women's team is the same as the USA men had for their successful world championship business trip to Turkey.

The Team USA women wish to leave the Czech Republic October 3 with the FIBA crown and the automatic bid for the London Games in hand as well as protect their FIBA number one world ranking.

Was a little bummed to find out that if I'd asked, I could have attended the 89-56 demolition of defending FIBA women's champ Australia Friday night in Hartford. However, not taking too much stock in that game because the Opals were missing Penny Taylor and Lauren Jackson. Jackson is busy playing in the WNBA Finals with Seattle Storm teammates and Team USA members Sue Bird and Swin Cash against the Atlanta Dream and Team USA member Angel McCoughtry and Team USA assistant coach Marynell Meadors.

UConn senior Maya Moore is the only collegiate player on this squad, but as far as I'm concerned she's probably made the 2012 London team as well. 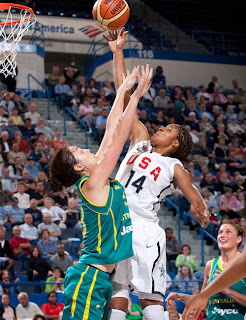 She led the way for Team USA by lighting up the Opals for 16 points. Beijing 'Young Gun' Kara Lawson chipped in 15 points and three assists with Tamika Catchings contributing 12 points and three blocks. Jayne Appel grabbed eight rebounds to go with her seven points.

The next night (September 11) they took out Spain 85-69. They got off to a slow start as Spain took an early 6-0 lead, but tightened up the defense and found themselves headed into the halftime locker room with a 44-24 lead.

They had to withstand a Spanish run that saw them shrink the lead to 68-63, but eventually got it together to build the lead back up to 76-65 and preserve the win.

They had five players in double figures led by UConn alum Tina Charles' double double of 17 points and 10 rebounds. Kara Lawson had 11 points while Candice Dupree, Asjha Jones and Maya Moore all chipped in 10 apiece.

That capped the domestic portion of Team USA's training and they now headed to Salamanca, Spain to tangle with the Aussies and Spanish teams again along with Senegal on Spain's home soil. They will be playing Australia in the first game of the 2010 Spain International Invitational tournament on September 17 with Spain taking on Senegal. Winners meet in the title game September 18 while losers meet for third place.
Posted by Monica Roberts at 6:00 PM