Team USA Women 2010 FIBA Worlds- On To The Second Round 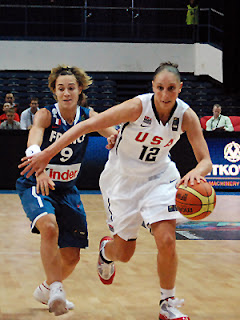 Another day at the FIBA World Championships for Team USA, another slow start.

This time it was because the competition was ratcheted up another level against a determined French team playing for the top seed in Group B.   Team USA eventually woke up, tightened the defense and used its depth and superior talent to prevail over Les Bleues 81-60.

Team USA tri-captain Diana Taurasi was the scoring leader in today's game with 15 points with Tina Charles and Candice Dupree coming off that deep bench to score 10 points apiece.   Maya Moore came close to positing a double-double with 9 points and 8 rebounds.  Angel McCoughtry chipped in 9 points and Sue Bird had 9 on perfect 4 for 4 shooting to help move this team to a 3-0 record and clinch the top seed in Group B.

“I thought the first half, the first 10 minutes especially, were difficult for both teams to make any shots,” said USA head coach Geno Auriemma. “Usually when you play pretty good defense and hold the other team to three or four or five points, you would think that you would come down and get maybe 10, 12, 14, but it was difficult for both teams in that first 10 minutes. As we settled into a rhythm we played really well. Our defense was much better in the second half. Our second group that came in did a great job in the third quarter. We have a young team, but we have some talented players and we have depth. I think that helped us again tonight.” 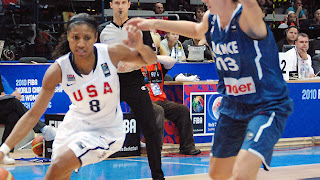 To illustrate how tough it was, Team USA had a slim 13-10 lead at the end of the first quarter before extending that lead to a 35-29 bulge at the halftime break.

A 25-19 third quarter built that halftime lead to a 61-48 lead by the end of it.    It also didn't hurt that the Americans had a 41-25 rebounding edge and for the third straight game had great shooting.   They shot 55.6% for the game and a scorching 42.7% from 3 pt range while forcing 15 French turnovers they converted into 20 points..


FIBA Number one ranked Team USA will have a day off  in Ostrava before the second round  basketball action starts.   They start by taking on Canada Monday, Belarus on Tuesday and their longtime basketball rivals and defending FIBA women's champ Australia on Wednesday.